La dona del 600 (The Woman of the 600), a comedy written and directed by Pere Riera, opens at the Teatro Goya in Barcelona.

Tomás is a widower in his seventies and his doctor orders him to avoid coffee, milk, salt and fat.  He lives alone and spends his time as best he can. One day, his daughter Montse brings him a surprise gift: a model of a Seat 600. Montse, who works for Médecins Sans Frontières and spends a lot of time abroad, thinks her present will keep Tomàs entertained; especially when he starts on a full-scale replica of the car they had at home for so many years. The “confit”, as it was known in the family as Carme, Tomàs’s wife, christened the small but beautiful car the day he brought it home many years ago, became another member of the family. 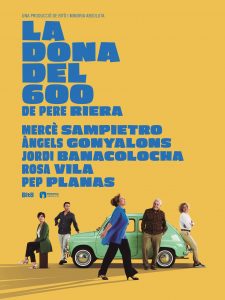 This is the departure point for this theatre production starring Mercè Sampietro, Àngels Gonyalons, Jordi Banacolocha, Rosa Vila and Pep Planas, which runs until 15 December at the Teatro Goya.